Rewards for being friendly?/Easier friendly status? 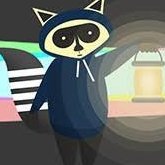